Here’s a little how-to when it comes to the practicalities of hosting a NYNO meeting centred around a meal.

We want to keep our breakfast gatherings as special as possible but also as simple to prepare as possible. For us, it meant a couple of loaves of homemade bread with butter and jam, and tea and coffee. Of course, you can use your own recipes, but we’ve included some of the ones we’ve used below in case you find that helpful.

If there is a suitable oven in or close to the meeting area, doing some baking on the day creates some wonderful smells. Practically speaking we have found it sensible to do as much preparation as possible before we arrive, and then perhaps have one thing prepared, ready to pop in the oven during the hour before the meeting. Of course, if you had people who wanted to get together early and bake on the day that could be fun! Just so long as it doesn’t become a chore and people’s service doesn’t begin to displace our participation in worship as the most important thing.

We’ll discuss liturgy in another place. But here it’s enough to say that how we sit together matters. We always try to give the impression of everyone sat round one table. Practically we can’t actually do this but we attempt to arrange what tables we have in something of a circle, with everyone seated around the outside. Here’s a diagram to illustrate. 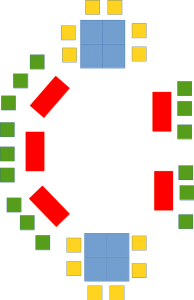 The blue squares are square dining tables, the yellow squares dining chairs. We arrange four of these tables into one large table at each end of the room and place dining chairs around three sides of the large table so that people are facing inwards to the room.

The red tables are are low coffee tables around which we place comfy arm chairs (green squares).

It’s more important to us that people should be aware of being sat round a table together than that they should be able to hear a speaker. Our meeting is more about emphasizing the participation of the people than the performance of the preacher.

To set up with normally arrive an hour before the beginning of the meeting. This allows enough time to set out the seating, do any baking

Each table setting has a plate, cup and saucer, knife, and serviette, along with the liturgy.

For a breakfast of up to 30 people:

We have clusters on the tables consisting of a plate of bread; milk jug, sugar bowl and teaspoons; butter and jam servings. They serve about 5-6 people. They should be in easy reach, and people are encouraged to serve one another. At the appropriate time, teapots and cafetieres are brought through from the kitchenette and again, we serve each other.

The liturgy we’ve been using will be discussed elsewhere, in brief outline though the meal goes as follows. Before we eat, we say grace together. As we share breakfast, we enjoy fellowship with one another. At this point, we also offer around little forms and give people space to write down any items for prayer. Our meal is drawn to a focus point by taking all the items for prayer to God before one another in silent prayer. We say the Lord’s Prayer together and sing a final hymn. We bring our meeting to a close by speaking aloud the benediction to one another.

Time disappears during a meal! But we strive to keep the whole meeting to about 45 minutes. That way people stay longer because they want more breakfast, or to talk to one another and not because the service is dragging on …

Afterwards, we have found that people are very keen to stay and enjoy further fellowship. We are always inundated with people willing to help with the clear-up, dish-washing and drying, and taking leftovers home!

Here’s a recipe for a simple soda bread. It’s fine to make the day before and bring to the meal pre-sliced. It’s a recipe by James Martin and can be found at bbc.co.uk/food .

We find that 3-4 loaves is plenty for around 25-30 people to have a couple of thick slices each.

Here’s a recipe for Hot Cross Buns, that worked so well on Easter Day, we may have to do it again before long. It was based on the recipe here.

It worked well to largely prepare this the night before, leaving the buns on trays in the fridge over night, covered in clingfilm. I took them out of the fridge for a gentle second rising first thing in the morning. They’re ideal to bake just before a meeting because they only take 12 minutes and so have time to cool down before icing, ans also because they reate an impressive aroma.